Shalrie Joseph Is Gone, And A Legend Leaves New England

The New England Revolution traded Shalrie Joseph on Wednesday, but what they lost is more than just a player. They lost a leader, a legacy, and a legend.

Share All sharing options for: Shalrie Joseph Is Gone, And A Legend Leaves New England

Shalrie Joseph, the talismanic midfielder who has anchored the New England Revolution for a decade, has gone. The charismatic and tenacious midfield general was traded to Chivas USA this morning (Wednesday) for Blair Gavin and a few other considerations.

Shalrie leaves as the club's all-time leader in appearances, starts, minutes played, penalty kick goals, and fouls suffered, and is in the top four on the team for assists, game-winning assists, shots, shots on goal, and goals. He leaves a one-time MLS MVP finalist, a regular All-Star selection, and a four-time member of the MLS Best XI. This is what the Revs have lost. On paper.

More than that, though, the Revolution have lost the face of their franchise. They have lost a man who earned a designated player contract through ten years of unwavering service and athletic excellence.

They lost a leader on the field and in the locker room. They lost a player who has proven time and time again that he would run through walls for his club and his teammates, and who loved New England and the city of Boston, and all of its fans. 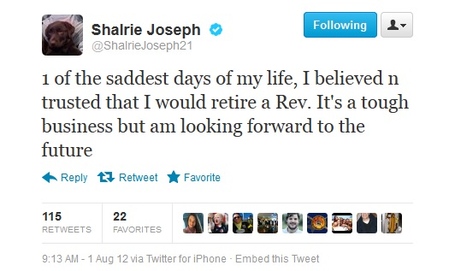 Joseph was one of the last remaining links to a different era for the Revolution. He and Matt Reis were the only players remaining on the roster who remembered what it was like to play in an MLS Cup Final. He was there when the New England Revolution were a team that struck fear into the hearts of clubs across the country, who were consistently in the conversation for the highest honors. He was there when New England won its first real trophies, the 2007 US Open Cup and the 2008 SuperLiga.

Joseph's time in New England was not without sacrifice on his part, either. He was the subject of overseas interest from the likes of Celtic FC in the middle of the last decade, and had two offers for his services turned down by MLS. Even after that, Shalrie did what many in MLS do not - he re-upped his contract with the league and stuck around, rather than trying his luck overseas as a free agent when his talents were in obvious demand.

In 2011, Joseph was called upon to represent his native Grenada in the CONCACAF Gold Cup. Rather than leave his squad - at that time a floundering club with no depth at any position - in a lurch, he turned down his nation's call and stayed with the Revs, even with the atmosphere around the team deteriorating.

Recently, Shalrie became more than perhaps even he believed he could be. After dominating the 2000's as a defensive midfielder, he was called upon to be the main playmaker and even goalscorer for the Revs in a difficult 2009 campaign. He delivered with eight goals and eight assists in a season that had him earmarked for League MVP consideration.

Since then, Revs fans have looked to Joseph not only as the team's leader, but also as its best player. His 2009-2012 (three and a half seasons) production of 21 goals and 17 assists far outstrips his numbers from 2003-2008 (six full seasons), arguably his prime, when he put in 16 goals and 17 assists. When New England needed him to step up, he answered the call.

At age 34, Joseph's talents this season may have appeared diminished. On the one hand, it seemed that Revs fans had grown to expect him to be a goal-machine and a playmaker, and he hasn't been that. On the other hand, Shalrie's talents have always lied in the dirtier, darker sections of the pitch, disrupting midfields and maintaining the tempo of the Revolution attack. There, even this season, Joseph continues to perform.

Still, the writing was on the wall that Joseph's days in Revolution blue were numbered. Last season there was a stretch of time where it was uncertain that he would sign a new contract for 2012, as the club's dire misfortunes began to get to him. This year, in the last month, he has seen a diminished role, often coming off the bench rather than starting, and seeing time as a stopgap center-back. 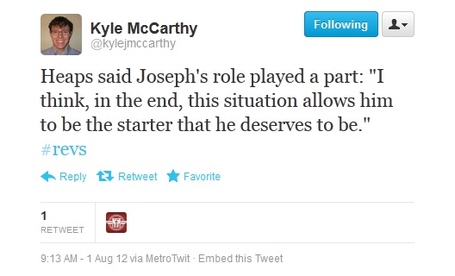 But who could have seen this coming? Joseph was more than just another player - he meant everything to this club. And it is obvious that he still has a lot to give. A departure in the offseason might not have seemed out of the blue, but a midseason trade just feels wrong.

I have had the pleasure of interviewing and talking to Shalrie Joseph for the last year and a half. He was also my team's coach in the recent Revolution Media Game, when players and coaches flipped the tables and put us through the paces in a series of four-on-four matches and skills challenges. Most of the players and staff seemed to be having a good time, but none more than Joseph, who was constantly smiling, encouraging, and laughing throughout the entire experience. His warmth towards us - people who routinely rip him and his teammates in print and digital media - was palpable, and appreciated.

Honestly, I don't know what I will do on Saturday when the Revs' match is over and I don't see Joseph in the locker room. It's going to be surreal.

Shalrie will return to Gillette Stadium on August 29th when Chivas travels to take on the Revolution. It's a day that should be marked on every Revolution fan's calendar. On that day, a hero will return to the place where he was made, and his fans should not forget him. When Foxboro's faithful see those dreadlocks swaying out of the tunnel, they should cheer and sing, no matter what jersey he wears.

Boston fans are big on their legends. Ted Williams, Bill Russell, Bobby Orr, Tom Brady; these men are larger than life throughout New England. Some may not know it, but Shalrie Joseph belongs with them. Today, the Revolution traded away a legend, and all of New England should be in mourning. 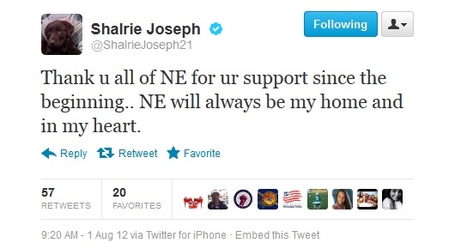 For more Revolution coverage, visit our team page and blog, The Bent Musket.