Hopefully, this won't become a real thing. Browsing through my Twitter feed last night, I stumbled upon this picture. It's of Tom Brady and some other gentlemen who I do not know. He says he is Bradying ... you know, like Tebowing? Yeah, it's exactly what it sounds like, and it's downright sad. See the photo after the jump. 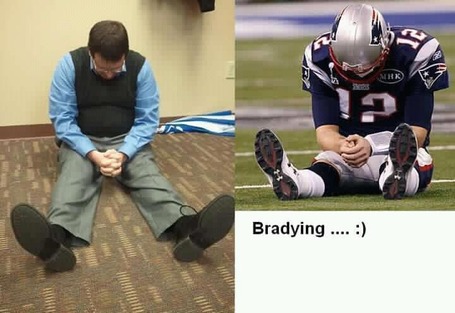 It's sad, depressing and angering. All of that and more. Brady, of course, was on the losing end of Super Bowl XLVI along with his New England Patriots in a 21-17 loss to Eli Manning and the New York Giants. It was pretty much like Super Bowl XLII - a late Pats lead, a game-winning drive led by Manning and plenty of missed opportunities for New England. Except this one hurt a lot more. Now, people are Bradying. I need some aspirin.