Super Bowl 2012, PHOTO: Giants Apparently Thought They Didn't Have To Play To Win

Share All sharing options for: Super Bowl 2012, PHOTO: Giants Apparently Thought They Didn't Have To Play To Win

On Sunday, Super Bowl XLVI will be played and will be watched by millions and millions of people around the world. Apparently one of the teams, the New York Giants, thought they didn't have to participate in the event to proclaim themselves the best football of 2011.

Last year, The Miami Herald proclaimed the Heat the champions of the NBA in the paper the following morning the team lost to the actual NBA champion Dallas Mavericks in Game six of the NBA Finals. On Saturday, this appeared on the New York Giants' official website periodically. Was this a mistake or were Chris Canty and Antrel Rolle the webmasters on duty? 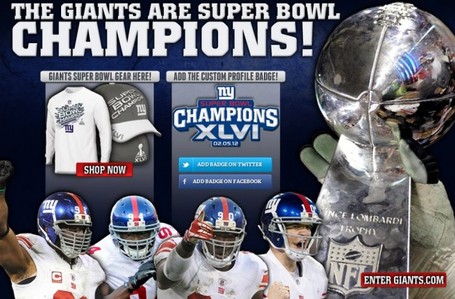 It's one thing to make a mistake after the final game was played, but before the game was even played? As Herm Edwards used to say "You play to win the game". You can't win a game you didn't play. Oh well, it's all good fun.

For New England Patriots fans, let's all hope this can be like the famous "Dewey defeats Truman" headline.