An estimated crowd of 25,000 fans showed up at Gillette Stadium in Foxborough, MA Sunday to send off the New England Patriots, who addressed the crowd then loaded team buses which headed to the airport so the AFC Champions could board a plane headed Indianapolis, IN -- the location of Super Bowl 46, Feb. 5 (6:30 p.m. ET on NBC). 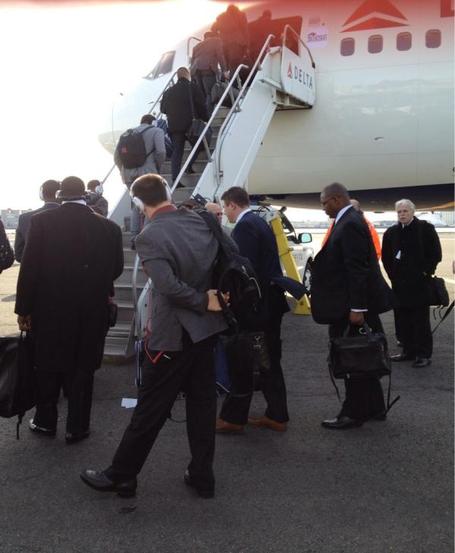 "We have the greatest fans in America. You guys have proved that year in and year out with your support," Patriots' quarterback Tom Brady said to the large crowed before his team boarded buses. "I wish I could take all you guys to Indy with us. We're going down there, and we're going down there for one reason. We're going to give it our best and hopefully we have a lot more people at our party next weekend."

The Patriots' opponent, the New York Giants, will arrive Monday and begin a week-long hype-fest that is known as Super Bowl week. On Tuesday, the two teams will hold media day, as the Patriots will begin theirs at 10 a.m. ET, while the Giants will have theirs at noon.

The most obvious story lines that will be discussed this upcoming week will be, of course, the rematch of the 2008 Super Bowl, which featured the Giants downing the Patriots, 17-14, thanks to the famous "Helmet Catch" by former New York wide receiver David Tyree. Another hot topic will be the health of the ankle of Patriots' tight end Rob Gronowski and the comparison between the two starting quarterbacks -- Brady and the Giants' Eli Manning.