Hurricane Irene - which has now been downgraded to a tropical storm - descended upon New England early Sunday morning, causing widespread damage and power outages (there are 296,896 outages reported in Massachusetts as of 2:05 p.m. on Sunday). But mostly, the state has been plagued with fallen trees - such as this one in my backyard. 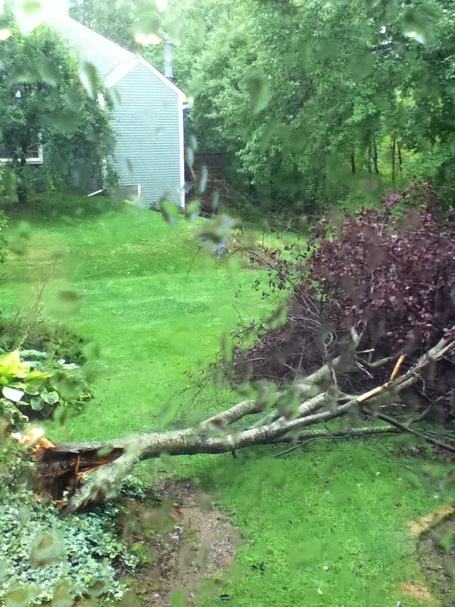 Not only has Hurricane/Tropical Storm Irene caused a lot of damage, but it has also altered the sports schedule in the New England area, as well as along the entire East coast. In Boston, the Boston Red Sox and New England Revolution had to reschedule their games for Sunday.

As for the New England Patriots, who lost to the Detroit Lions in a preseason contest on Saturday night, they battled with weather conditions and power outages throughout the night. Thankfully, the Patriots arrived home safely a little after 4:00 a.m., according to the Patriots' official Twitter account.