Tom Brady took questions with fans and met with reporters as part of a promotional even for Under Armour in New York City on Friday, taking time to discuss his role as lead plaintiff in the lawsuit against the NFL, his foot surgery and the 2011 NFL Draft. 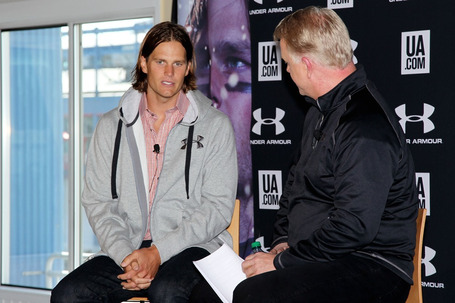 Of the ongoing labor dispute, Brady said, "I think the important thing is to realize is that we're trying to bring reason and compromise to a very challenging agreement."

"This is not something that's easy. There's a lot that goes into it. I know a lot of people are hard at work. DeMaurice Smith has had a lot of meetings with Roger Goodell. Mr. Kraft is heavily involved, and everyone's trying to accomplish the same thing. Hopefully, there's an agreement at some point soon."

Brady added: "Was it difficult? I'm always trying to figure out what the right thing is."

Our Indianapolis Colts blog, Stampede Blue, was on hand, and followed with up Brady.

BBS: What were your thoughts when you heard of Judge Nelson's decision Monday night?

Tom Brady: I was actually in bed when the news broke. So, I didn't hear about it until Tuesday. Um, this isn't going to get resolved by one decision. This is a process.

BBS: Do you know if any Patriots players attempted to go to the team facility today?