The official New England Patriots schedule for the 2011 NFL season was released on Tuesday night, with the Pats opening up against the Miami Dolphins on the road on Monday, September 12, 2011.

Per usual, the Pats-Dolphins game on Monday night will be broadcast on ESPN, as the Worldwide Leader purchased the rights to the iconic weeknight broadcast from ABC in 2005.

The Patriots' home opener comes in Week 2 when New England hosts the San Diego Chargers on Sunday, September 18. New England heads back on the road to take on the division rival Buffalo Bills in Week 3 before heading out west for a match-up with the Oakland Raiders in Week 5.

Then, there's the big rematch with the hated New York Jets at Gillette Stadium in Week 5. New York knocked New England out of the playoffs in the second round of the 2011 NFL Playoffs last season, winning 28-21.

Following their nationally televised against the Dolphins, the Patriots game against the Jets at New Meadowlands Stadium in Week 10 will be broadcast on Sunday Night Football.

Here's a look at the complete schedule, straight from Patriots.com. 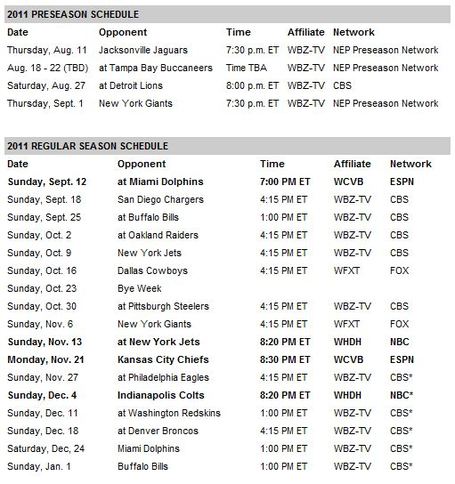 Then again, this schedule could mean absolutely nothing if indeed there is no season in 2011. That lies in the hands of Roger Goodell, DeMaurice Smith and the United States court system.

For more on the 2011 NHL schedule, visit SB Nation. As always, for everything Patriots related, check out Pats Pulpit.