Sunday marks the final football for two weeks, before Super Bowl XLV on Feb. 6. The action begins at 3 p.m. EST, with the NFC Championship Game on FOX, pitting long-time rivals against each other: the Green Bay Packers and the Chicago Bears. It marks the 182nd time these NFC North teams have met (Chicago leads the all-time series, 92-83-6), but it is just the second time they've crossed paths in the playoffs (the Bears won their 1941 meeting, 33-14).

In 2010, the Bears won the NFC North with an 11-5 mark, giving them the No. 2 seed in the playoffs. They held of the surprising No. 3 Seattle Seahawks in the Divisional Round 35-24. Green Bay won their final two regular season games to finish 10-6 and sneak into the playoffs as the No. 6 seed. In the Wild Card Round, they knocked off the Philadelphia Eagles at home, 21-16. Then, in the last weekend's Divisional Round, they trounced the Falcons in Atlanta, 48-21.

We're now less than three hours away from kickoff, and they're getting the field ready for what should be an epic NFC Championship Game. 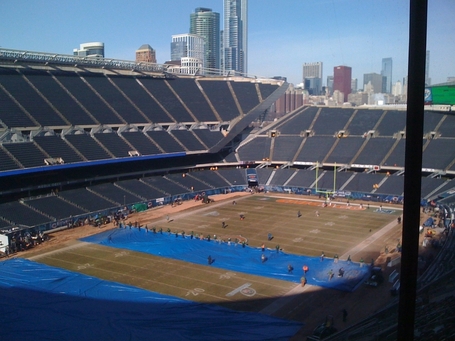