VIDEO: Pat Chung's Fake Punt, And Why He Made A Bad Decision

Share All sharing options for: VIDEO: Pat Chung's Fake Punt, And Why He Made A Bad Decision

The Patriots attempted a fake punt during Sunday's loss to the New York Jets. It did not go well. Let's talk about it here for a bit.

(If that video gets removed, check out NFL.com)

Bill Belichick acknowledged as much during his postgame press conference (as only he can), saying, "We just made a bad mistake on the play. Just a bad mistake. I'm not even going into it."

Indeed. It was a very bad mistake. And apparently, it was Pat Chung's mistake. Not just because he bobbled the snap, but also because it was reportedly Chung who made the call, according to punter Zoltan Mesko.

"We trust the decision Patrick makes," Mesko said. "It just didn't work out in that particular occasion. That's why the coaches trust him to run it, and that's why they give him the green light, if he has it."

Mesko went on to say that "the play was implemented in training camp, and it's the first time it was run this season." But even without the bobble, there are still many reasons it was not a smart call by Chung.

The first and most obvious is that there is no guarantee he's picking up those four yards, even with a clean snap. 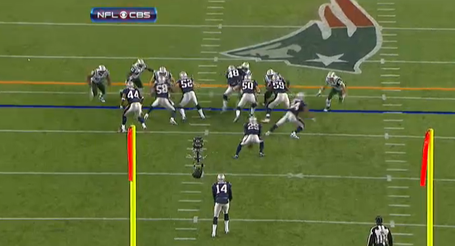 That's the exact moment the ball goes through Chung's hands. The Jets' Eric Smith is already bearing down hard, with just Sammy Morris between him and Chung. 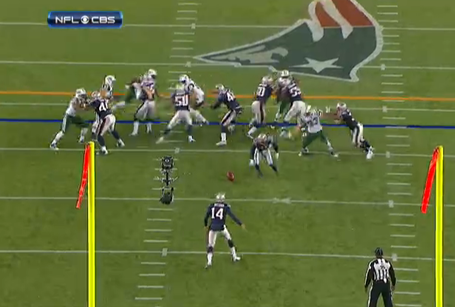 And as you can see, Morris had some difficulty blocking Smith anyways.

But the more egregious part of Chung's call to run the fake was the situation: on their own 38-yard line, down just 7-3 and only 1:06 left in the first half. Even though the Jets had all three timeouts remaining, punting the ball away at least takes some time off the clock and pushes them back to their side of the the field. And really, the Patriots defense had done a good job containing New York up until that point. But instead the Jets took over on the Pats' 37 and just four plays later, had themselves a 14-3 halftime lead.

It likely wasn't the difference between a win and a loss, but it certainly didn't help things.