NFL Playoff Schedule: Times And Announcers For Seahawks-Bears, Jets-Patriots In Divisional Round

Share All sharing options for: NFL Playoff Schedule: Times And Announcers For Seahawks-Bears, Jets-Patriots In Divisional Round

The NFL Playoffs schedule continues on Sunday, with the second pair of game of the Divisional Round. The NFC opens play, when the surprising Seattle Seahawks visit the Chicago Bears at 1 p.m. Then in the afternoon game, the New York Jets and New England Patriots continue their rivalry and (finally) play after a week of trash-talking.

The ridiculousness of their war-of-words continued Sunday morning with the cover of the NY Post, which made yet another not-so-subtle reference to feet. 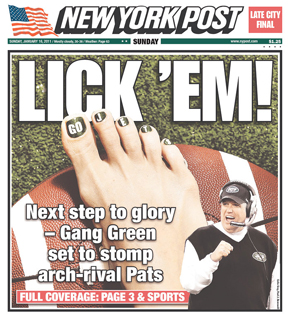 The back page is equally absurd.

Both the Bears and Patriots are 10-point favorites on Sunday, according to Bodog (New England opened giving nine points). After the jump, complete schedule information for Sunday's Divisional Round games, including times and announcers.