A Patriots Fan's First Trip To Gillette, And Wondering If Brady Was Right

On Sunday, SB Nation Boston's editor Ryan Hudson took in his first ever home Patriots game as a fan. While he got to see a win over the Bills, he couldn't help but wonder: what if Tom Brady's criticisms were accurate?

Share All sharing options for: A Patriots Fan's First Trip To Gillette, And Wondering If Brady Was Right

A couple weeks ago, Tom Brady offered his opinions on the Patriots home crowd, calling them out for leaving Gillette Stadium early during the Week 1 win over the Bengals.

"When I looked up, half the stadium was gone when we were up 21 points early fourth quarter, which I wasn't so happy about," Brady said. "I don't think the Jets fans leave early. They're going to be loud the whole game."

I went to Sunday's game against the Bills. It was the first home Patriots game I've ever attended as a fan (there are a couple qualifiers in there, so an explanation: my first-ever NFL game was a 2003 Giants-Patriots preseason game in Gillette, and I was standing on the sidelines for it, the lone perk of an unpaid summer internship with the Pats and Revolution. My first-ever NFL game as a fan was later that year, at Washington, thanks to my buddy Jeff and his family's season tickets. As you might recall, the Redskins won that game, 20-17 ... the last Patriots loss before they embarked on their 21-game win streak). 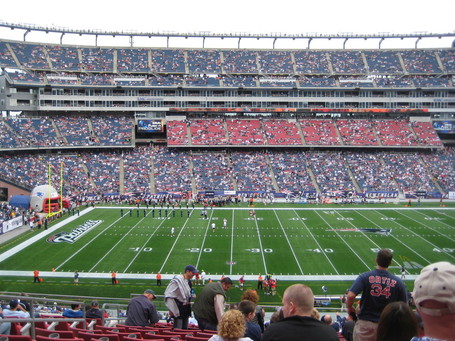 Thanks to another friend (hi, James!), I had a club level ticket, admission to the team's pregame tailgate (complete with free food, booze and people awkwardly posing with a few of the Patriots cheerleaders ... did you know grown men get cheerleaders' autographs?) and a parking pass -- all for free. (A brief recap: for the three NFL games I have attended, I have stood on the sidelines, sat 10 rows back from the endzone and most recently, enjoyed the luxuries of the club level. I assume this is not typical.)

The Patriots tailgate is held in the team's practice bubble. Let me tell you: there are few things stranger than eating penne  and pulled pork (not together) at 11 o'clock in the morning with a few hundred strangers in a what is essentially a vast, open, starkly white airplane hanger. Them ambiance was just so -- oh hey, look at all the open bars with free alcohol! 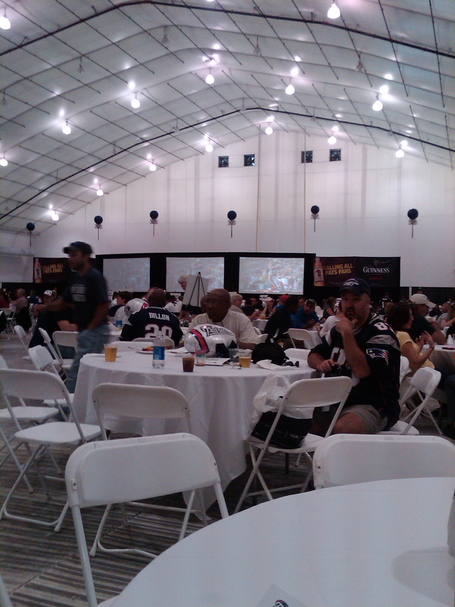 After a breakfast that prominently featured gin and tonics, I made my way through the private entrance in Gillette, up the escalator, past the multiple bars, through the glass doors and to my padded seat at the 40-yard line (again, decidedly not your typical NFL experience).

Not that I needed the reminder of course, but it did not take long to have the point driven home that I was sitting in the club level. Because I was standing for the game's opening kickoff, and that is apparently frowned upon.

"Hey, can I watch the game today?"

"Ya gonna sit down?? I'm trying to watch the game heah!"

Which first got me thinking: Was Brady right in his criticism of the Patriots faithful?

The game continued, and it was entertaining: Randy Moss touchdowns; a fan in the eerily, creepily accurate Randy Moss mask; Danny Woodhead sightings. And it was close throughout -- the Pats only led 17-16 at the half.

(Important side note: No one told me that the Patriots play Bon Jovi's "This is Our House" after every touchdown. And that the crowd is expected to sing along  - they comply. I was not ready for over 60,000 people chanting, "THIS! IS! OUR! HOUSE!" Just goes to show you that no good can come of a friendship with Bon Jovi. Even if you are Bill Belichick.)

Anyways, with 4:08 still left to play in the game, the Bills trailed by just one score, 38-30. And that's when the fans started leaving.

Well, really you could see a few people here and there earlier in the fourth quarter, after the Patriots went up by 15 points, which, okay. But the real mass exodus was noticeable right after the Bills scored to make it a one-possession game.

And sure enough, the Bills held the Patriots, forcing them to punt -- just their third three-and-out of the day, which prompted boos from the home crowd, despite the 38 points on the scoreboard. Buffalo got the ball back, trailing by just eight points, with nearly a full three minutes left (2:58), and roughly half the crowd was already on their way to their cars (to get a jump on the second-worst stadium traffic in the NFL, I suppose). 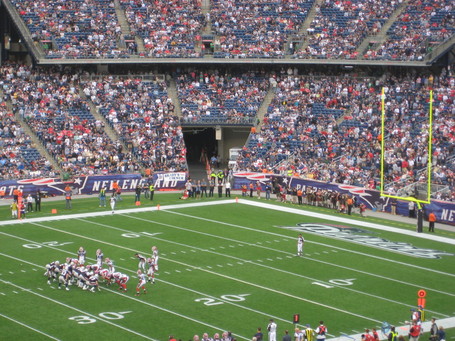 The fact that Harvard's Ryan Fitzpatrick threw an interception on the first play of the drive is irrelevant, really (he no doubt failed to account for wind variables and/or had a computing error in his formula). Irrelevant because only about 40,000 people even saw it.

Are Patriots fans so accustomed to success at this point that a close win over the Bills is too routine? Is this what you get when you build a stadium out in the suburbs, away from the city? Are fans traveling south from New Hampshire and Vermont to blame for this? (The people of Vermont, in general, seem far too passive a people to truly get riled up at an NFL game.)

In the end, all Tom Brady did was accuse the home fans of being quiet and leaving early -- and on Sunday, it sure seemed like he was right.