The New England Patriots host the Green Bay Packers Sunday night at Gillette Stadium in Foxborough, MA, and will do so in some typically frigid December temperatures.

While snow is no longer in the forecast, it's expected to be in the mid 20s, with winds at 13 mph. Though with a game between Green Bay and New England, you wouldn't expect the cold weather to really be a factor.

With snow expected, the tarp had been on the field but the crew is in the process of removing it now. 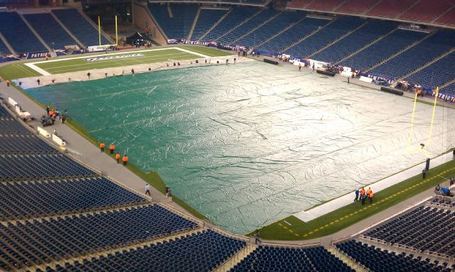 The Packers will be without quarterback Aaron Rodgers, sidelined because of a concussion he suffered in last week's loss to the Detroit Lions.

The Patriots, who have already clinched a playoff berth, will be playing with a chance to further solidify their position: with a win and a Jets' loss to the Steelers, New England would clinch the AFC East, and with it a first-round bye. With about nine minutes left in the third quarter, the Jets are trailing in Pittsburgh, 17-10.