The New England Patriots have had their share of coaching controversies over the years, be it Spygate, rude handshakes or being named the "Other Man" in a nasty divorce. But at least no one the staff ever tripped an opposing player. The Jets cannot claim the same after Sunday.

Alosi apologized after the game.

"I made a mistake that showed a total lapse in judgment," Alosi said in a statement. "My conduct was inexcusable and unsportsmanlike and does not reflect what this organization stands for. I spoke to Coach Sparano and Nolan Carroll to apologize before they took off. I have also apologized to Woody [Johnson], Mike [Tannenbaum] and Rex [Ryan]. I accept responsibility for my actions as well as any punishment that follows."

As you can imagine though, the whole incident did not sit well with Miami, particularly Karlos Dansby (especially when he saw a photo of it):

This is the photo in question: 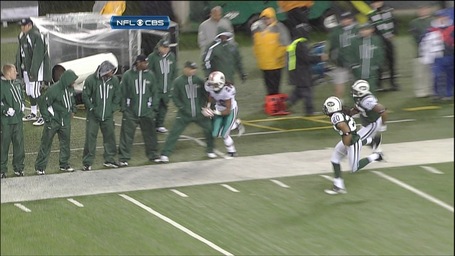