How does Bill Belichick celebrate a victory over epic rival Indianapolis? By playing lacrosse.

As reported by ESPN Boston, Belichick took to the Gillette Stadium field after Sunday's 31-28 New England Patriots win over the Colts and threw around with Boston Cannons midfielder Paul Rabil. Rabil tweeted a photo of the toss around on Monday morning, saying:

"Coach B throwing a bounce pass my way. The man's got flavor with his yellow stick." 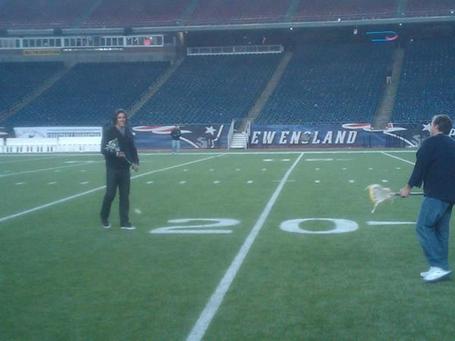 Raised in the lacrosse-obsessed state of Maryland, Belichick has a strong love of the sport. His daughter, Amanda, is an assistant women's lacrosse coach at Ohio State after serving in the same capacity at UMass. His son Stephen is a defenseman for Rutgers. Belichick himself played lacrosse at Wesleyan University, serving as captain his senior year. When the Pats faced the Baltimore Ravens in Week 6, Belichick's pre-game availability with Baltimore media became a full-blown lacrosse discussion.