Share All sharing options for: Brett Favre Injury Results In Eight Stitches To The Quarterback's Chin

Brett Favre left the game against New England early in the fourth quarter when he was hit hard in the chin by the Patriots' Myron Pryor. Favre was slow to get up and was eventually seen being carted of the field and back into the locker room, with a towel firmly pressed against his chin. 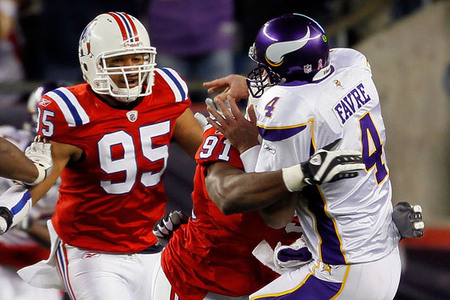 It turns out Favre suffered a lacerated chin on the play, resulting in eight stitches. Brad Childress said that Favre was feeling a bit "woozy" after the hit. 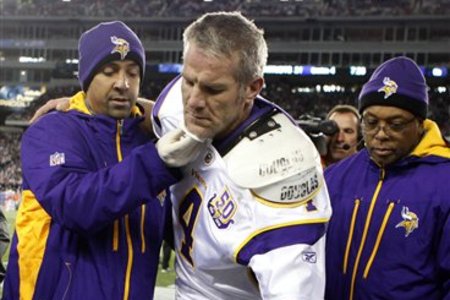 Following the game, Favre had a gash on the right side of his chin, but added that he was "ready to play next week," at home against Arizona Cardinals, and he has no "lingering effects." Though he does expect to undergo a concussion test.

Favre's replacement, Tarvaris Jackson, seeing his first action of 2010, went 4-for-6 with a touchdown.

Best In The League: Patriots Outshine Viking Stars In 28-18 Win