The 2012 Big East Tournament will resume on Friday with semifinal action from Madison Square Garden. Thursday's action was not the prettiest, but it was certainly exciting and close. Now, the four winners will face off for a chance to reach the Big East Championship Game on Saturday.

Top-seeded Syracuse remains the prohibitive favorites after dispatching Connecticut in probably the most well-played game of the day. The Orange will take on Cincinnati, who topped Georgetown in overtime. Louisville and Notre Dame will square off in the other semifinal following that game. The Huskies are still in good shape for an at-large bid to the NCAA Tournament even despite the loss.

Here's a schedule for Friday night's semifinal games and a bracket of the entire tournament. 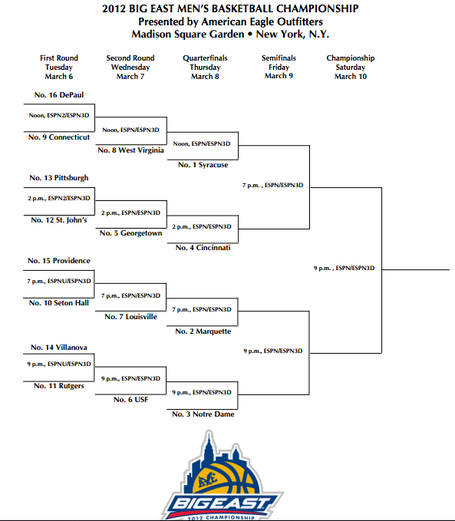 For more on the Huskies, The UConn Blog, SB Nation's Connecticut site. For all your Big East news during championship week, check out Big East Coast Bias. Click here for more on the 2012 Big East Tournament.