Dustin Pedroia may only be five-foot-nine, but he takes up all of the space on the cover of this week's Sports Illustrated, in which Tom Verducci penned a story on the "Muddy Chicken" and called him the heart of the Red Sox. 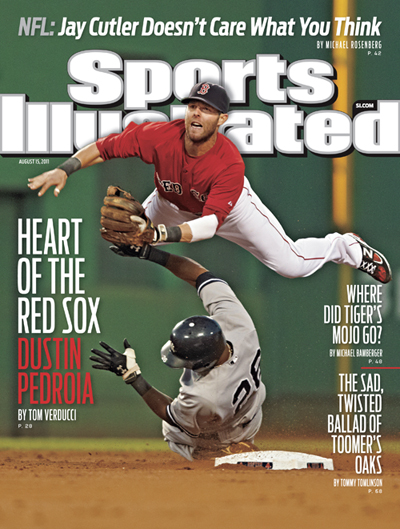 For an excerpt from Verducci's story in SI, continue reading after the jump.

In a lineup of stars, nobody has played a larger role in the success of the Red Sox than the 5' 8", 165-pound Pedroia. And nobody has inspired better nicknames. Pedroia tells senior baseball writer Tom Verducci that his latest moniker, the Muddy Chicken, came about during the postgame meal following Boston's 1-0, 16-inning win over Tampa Bay in June: "David [Ortiz] was eating this chicken from the Dominican Republic. I don't know who he got it from. But it was [bleeping] disgusting. So I said, ‘I want to be called that.' ... [Bleeping] Muddy Chicken.... They started laughing, so they started calling me that. And it was a 16-inning game, and I think there were some cocktails involved in some people's interviews. That's basically it. And then we got back home and, thanks to New Balance, there are boxes of Muddy Chicken T-shirts. I'm like, What's wrong with you guys?"

The complete story can be found in this week's SI, which hits newsstands on Wednesday.