With our nation on the brink of a double-dip recession, the times couldn't be better for the Red Sox-Yankees rivalry. At least financially at Fenway Park. Despite the rough economy, tickets for this week's Red Sox-Yankees series are selling for 40 percent more than the team's home average at Fenway Park, according to TiqIQ, which provided a chart to show the average prices (after the jump). 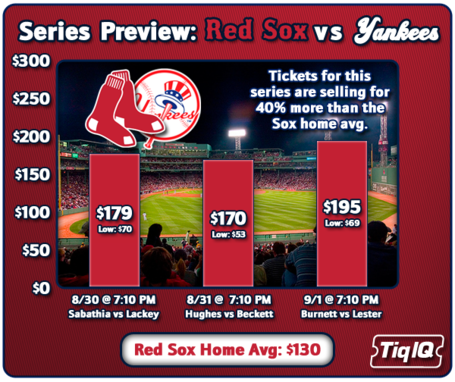 This really puts everything into perspective. Many families are struggling to put food on the table, yet ticket prices for the Sox and Yankees are sky high - and people are buying them. But how do we make a dent in these high prices?

It's really simple - stop buying the tickets. Not forever, of course, but if enough people stopped buying tickets at these bloated prices, the Red Sox would have no choice but to lower their ticket prices. If this is done on a national level, it would have a similar effect of every team (sorry Kansas City Royals).

If this is successfully done, then athletes' salaries would come down considerably, which is better off for everyone involved (except big-time athletes). Cut the source of the income, cut the ridiculous salaries. Simple, no?

For more Boston Red Sox coverage, visit our team page and blog, Over The Monster.