Sports Illustrated has predicted in its 2011 MLB Preview that the Boston Red Sox will post a record of 100-62, win the AL East and defeat the San Francisco Giants in the 2011 World Series.

In addition, SI says Carl Crawford will have the best chance of any player in the division to with the AL MVP award and that Jon Lester has the best chance to win the AL Cy Young award. Take a look at Sports Illustrated's complete predictions for the 2011 MLB season, as well as its postseason predicts, after the jump. 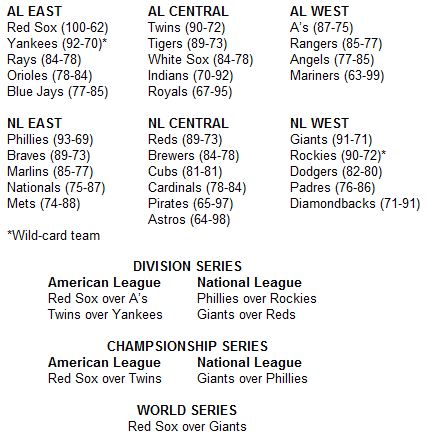 On the flip side, the worst case scenario is that the injury bug could bite hard again and the Sox' pitching staff might struggle to keep its ERA down, specifically Josh Beckett, John Lackey and Daisuke Matsuzaka.