Back in 1912, the Red Sox were the dominant team in the American League, accruing a 105-47 record en route to the club's second World Series.The undisputed ace of the staff who received credit for a good few those wins was Smoky Joe Wood. And while his 1.91 ERA and 34-5 was good for fifth place in MVP voting behind winner and teammate Tris Speaker, it also earned him some less-than-pleasant correspondence.

While looking through some old photos of Wood, Tyler Maas of Bugs & Cranks happened upon this 100-year-old death threat: 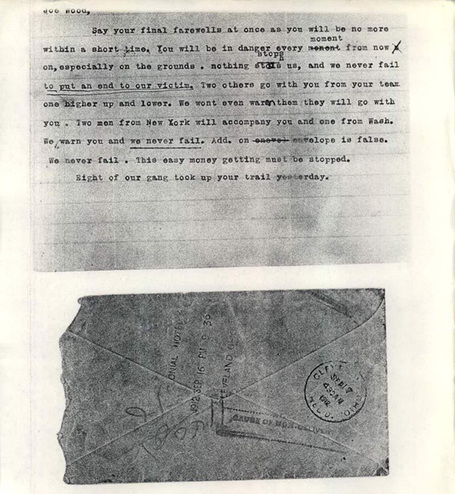 As Maas points out, the threat was entirely empty. A perfectly healthy Wood went on to win three games against the New York Giants in the World Series before passing away more than seventy years later. Whether this was just a matter of an opposing fan scorned or, as Rob Neyer suggests, gambling interests, we'll never know.

I do wonder, though, if they bothered to send Eddie Cicotte, the team's only losing pitcher (1-3, 5.67 ERA) a nice thank you card.