Share All sharing options for: Rays Fans Thank Carl Crawford For His Time In Tampa Bay

When Carl Crawford signed his deal to join the Boston Red Sox, it meant he was leaving the Tampa Bay Rays, the one and only team he had played for during his nine-year pro career after being taken by Tampa in the second round of 1999's draft. As you may imagine, some fans grew quite attached to Crawford, including those over at our Rays blog, DRaysBay, and they wanted a way to say "thank you."

So they took out a full-page ad in Friday's Tampa Bay Times to say just that.

This project was about two things: thanking our franchise's best player for his service in our community, and showing the world that Tampa Bay fans do exist and have class and dignity. I think we've sent both messages loud and clear.

After the jump, a picture of the thank you message. 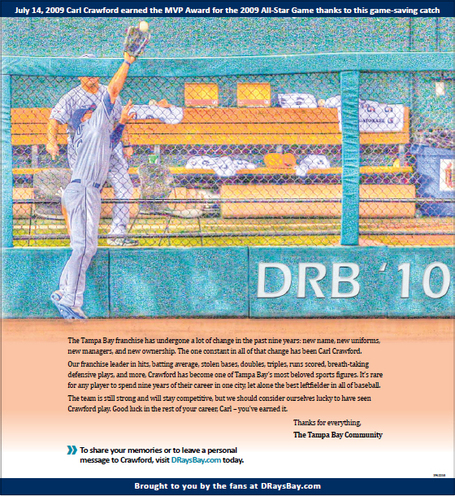 The Tampa Bay Rays franchise has undergone a lot of change in the past nine years: new name, new uniforms, new managers, and new ownership. The one constant in all of that change has been Carl Crawford.

Our franchise leader in hits, batting average, stolen bases, doubles, triples, runs scored, breath-taking defensive plays, and more, Crawford has become one of Tampa Bay's most beloved sports figures. It's rare for any player to spend nine years of their career in one city, let alone the best left fielder in all of baseball.

The Rays are still strong and will stay competitive, but we should consider ourselves lucky to have seen Crawford play. Good luck in the rest of your career, Carl -- you've earned it.

Thanks for everything,
The Tampa Bay Community

Kudos to Steve and everyone over at DRaysBay for this genuinely classy response to one of their favorite players signing with their AL East rivals.

Image via NESN; for an ever better look at the ad, check out DRaysBay's pdf version.