Thank goodness for the New York Post, without which we'd be fresh out of water cooler banter on this holiest of days: Holiday Shopping Season Eve (don't let the big turkey meal fool you, they're just fattening you up for the stretch run).

The Post is running a picture on Wednesday's back cover of Derek Jeter in a Boston Red Sox uniform, the day after GM Brian Cashman said that if Jeter doesn't think the Yankees' three-year, $45 million offer is fair then the shortstop can "shop." 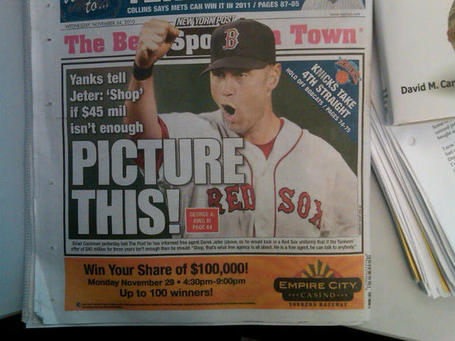 So, should the Red Sox actually consider this? In short, no. In fact, it would be a terrible idea!

Adding Jeter would be a great move. In 1998. You know, back in the good old days when Ben Stiller was a successful actor, people hired PIs instead of using Facbook and Brett Favre was an NFL quarterback. You're kidding me, he's still playing?

But even in his prime, Jeter was a plus-defensive SS at best. He hit well, for sure, and could run the bases as well as a left-infielder could be asked to. But now? His range is comparable to that of a paperweight, his OPS+ dropped below 100 and his on-base percentage ranks him just behind Chone Figgins in the A.L.

Not exactly qualities you want in your shortstop for the next three years, especially with a finally healthy Jed Lowrie ready to go.

I understand that signing Jeter sticks it to the Yankees in a way that nobody since Babe Ruth - and certainly not Johnny Damon - could have done, but the Red Sox would be getting a minus-bat and a minus- to minus-minus-glove. For $45 million? No thanks.