PHOTO: Jeremy Lin Returns To Harvard To Pick Up Diploma

Share All sharing options for: PHOTO: Jeremy Lin Returns To Harvard To Pick Up Diploma

Jeremy Lin returned to his old stomping ground, Harvard University, on Thursday to pick up his diploma. Lin, who currently plays for the Golden State Warriors, played four seasons of college basketball for the Crimson and graduated in 2010 with a degree in economics. 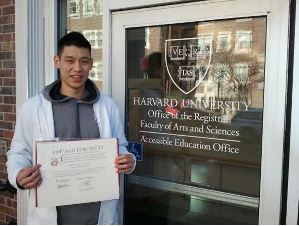 In his senior season at Harvard, Lin averaged a team-best 16.4 points and shot a career-high 51.9%. During his four-year career with the Crimson, Lin averaged 12.9 points and 4.3 rebounds while shooting 47.1% from the floor.

Lin, now a rookie in the NBA, has played 23 games with the Golden State Warriors, where he is averaging 1.9 points and 1.1 assists. The Warriors are in town to face the Celtics on Friday night at TD Garden.

Now that Lin has his degree from one of the world's premier universities, he'll have something to fall back on if this whole basketball thing doesn't work out, and that's a lot more than most professional basketball players can say.