Duke (19-2, 6-1 ACC) suffered its second loss of the season on Sunday against St. John's, but thankfully for Mike Krzyzewski, the Red Storm aren't a conference opponent. The Blue Devils have held strong in conference play in the past week, defeating Boston College, 84-68, on Thursday night to secure the top spot in the ACC standings.

Archrival North Carolina (15-5, 5-1 ACC) is right on Duke's tail in second place in the conference, and the Tar Heels have won three straight games and eight of their last night. UNC takes on Boston College on Tuesday night at Conte Forum (9 p.m. EST; TV/Radio: ACC Network/WRKO).

As for Florida State (15-6, 5-2 ACC), which had been tied atop the ACC for most of the season to date, the Seminoles slipped to third place in the ACC after losing to Clemson, 62-44, on Saturday.

BC (14-7, 4-3 ACC), which had also been tied atop the conference standings in the early going, has lost three of its last four ACC games, including two straight to Florida State and Duke. As a result, BC is currently tied for fourth in the conference with Clemson, Virginia Tech and Maryland. Here's a look at the complete ACC Standings as of Tuesday morning. 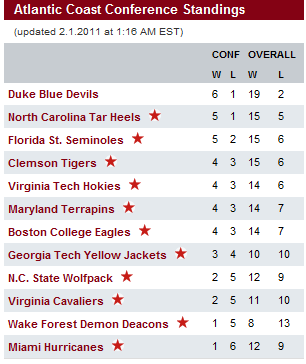