The Blue Devils are coming off of an 83-59 win over Wake Forest on Saturday. Duke has won three in a row after losing to conference rival Florida State, snapping a 25-game winning streak for the Blue Devils.

Florida State has been playing solid basketball in the month of January, winning four games in a row and four of six in the month. The Seminoles are coming off an impressive 67-51 win over Boston College on Saturday in Tallahassee.

As for BC, it has struggled in its last eight games, posting only four victories. After a strong 3-0 start in ACC play, the Eagles have dropped two of three conference games against Miami (FL) and Florida State. The schedule doesn't get any lighter for Boston College either, as the Eagles square off with national powerhouse Duke on Thursday and North Carolina next Tuesday. 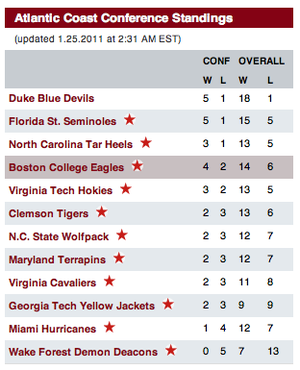