Apparently, the NBA has already counted out your Boston Celtics. As first noted by Reds Army, the league is advertising an Oklahoma City Thunder T-shirt saying "Beat The Heat," as seen here. 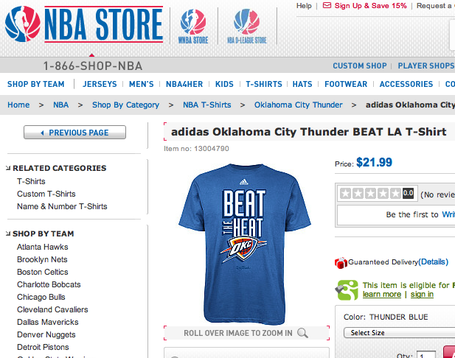 Interestingly, the product description on the NBA Store website says "adidas Oklahoma City Thunder BEAT LA T-Shirt," but as you can clearly see, the shirt says "Beat The Heat." Just a careless mistake, or a message? Well, ask the league and they're say it is an oversight. However, we all know that a Thunder-Heat matchup in the 2012 NBA Finals would be a batter series from a television standpoint.

Of course, there's still the matter of Game 7 between the Heat and Celtics on Saturday night, which will determine the Eastern Conference Champion and Oklahoma City's contestant. Hopefully, some members of the Celtics will see this picture. A little extra motivation never hurt anybody, right?