Outside of hot a second quarter, the Boston Celtics were outworked by the Miami Heat throughout their 93-79 loss in Game 1 of the NBA Eastern Conference Finals on Monday. LeBron James was dominant with 27 points and eight rebounds.

James was apparently rather pleased with his performance. ESPN cameras caught James laughing in the face of Kevin Garnett late in the fourth quarter. You can check out the punking after the jump, with a bonus shot of Doc Rivers. 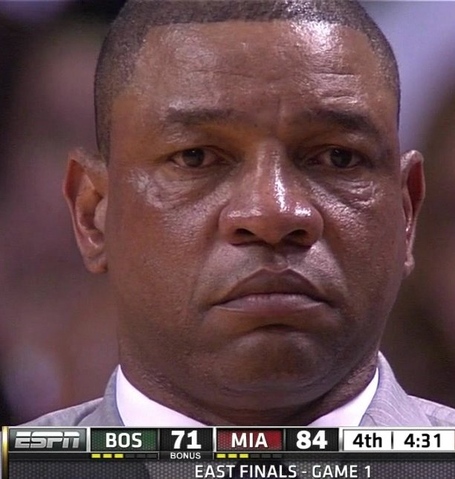 How James is still alive is anyone's guess. There's no doubt that KG will remember this incident. Garnett was the only Celtics player with a pulse throughout Monday's game, scoring 20 points with eight rebounds. It will be interesting to see how he responds in Game 2.