Rob Gronkowski continues to let loose now that the Patriots season is over. He was spotted courtside at TD Garden on Thursday, taking in the Boston Celtics game against the Los Angeles Lakers. It has been an eventful week for Gronk. He was caught on grainy camera phone footage dancing to LMFAO hours after losing to the New York Giants. He seemed to be enjoying himself during the game, however, despite whatever criticisms he earned following the Super Bowl loss.

Photo after the jump. 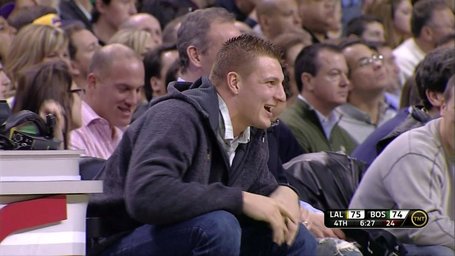 The record-setting tight end was apparently giddy when a certain Lakers superstar paid him tribute.

Rob Gronkowski is grinning from ear-to-ear after Kobe Bryant went over and shook his hand.

Of course, Kevin Garnett and Rajon Rondo gave him the ultimate honor by taking a play right out of the Pats playbook, sort of.

For more on the Celtics, head over to CelticsBlog. Check out our dedicated StoryStream for more from Thursday's game.