Pretty safe to say that ESPN may want a do over on this one. Jeremy Lin has naturally been the lead story for the last week, for good reason. Lin, one of the few Asian-Americans in the NBA, has been tearing up the league since he was inserted into the Knicks' starting lineup. Lin lost his first game as a starter Friday, resulting in this headline from the Worldwide Leader. Check it out after the jump. 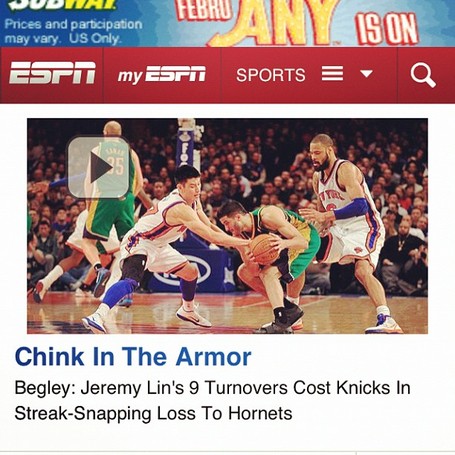 Ouch, that's just not good judgement. In case you didn't know, the phrase "chink" is "used as a disparaging term for person of Chinese birth or descent," according to The Free Dictionary. One would assume that this editor meant no harm when slapping this headline on the site, but when you're running the most powerful sports website in the world, making a mistake of that magnitude is just not acceptable.