Ray Allen, And How The Boston Celtics Get Him Open Looks

Share All sharing options for: Ray Allen, And How The Boston Celtics Get Him Open Looks

The Boston Celtics' Ray Allen has made 2,559 three-point shots in his career. The NBA record, held by Reggie Miller, is 2,560. Allen averages 2.38 successful three-pointers per game for his career, and is averaging 2.25 per contest this season (115 3PT in 51 games). So, it stands to reason that Thursday night, when the Boston Celtics host the Los Angeles Lakers, Allen will surpass Miller and become the NBA's most prolific long-range shooter.

For a while now, Allen has been one of the league's best shooters -- if not the best. You know that. I know that. The other teams' coaches certainly know that. So, how does Allen keep getting open looks? SB Nation's Sebastian Pruiti did some investigating and found that, according to Synergy Sports Technology, "52.5 percent of Ray Allen's 284 catch-and-shoot jumpers are considered unguarded." Which, as Pruiti, is "absolutely mindboggling."

Part of what makes Allen so hard to defend is the fact that he is so good at reading the defense as he comes off of the screen. This is part of the reason why the Celtics have Allen come off of screens so much -- they can trust that he will make the correct read more times than not.

One of the off-screen plays that the Celtics use the most is a double screen on one side with a single on the other, giving Allen the opportunity choose which screen he wants to use: 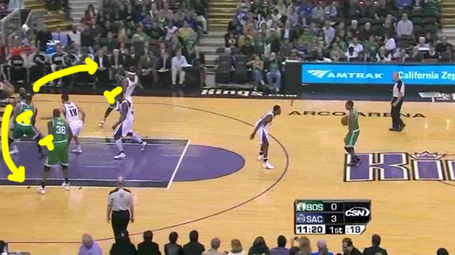 With Rajon Rondo bringing up the basketball, Ray Allen gets himself underneath the rim as the rest of the team gets in position. Paul Pierce and Shaquille O'Neal set up to set screens on one side of the court and Kevin Garnett sets up on the other side.

Pruiti writes, "What makes this so hard to defend is that only Ray Allen knows which direction he is going in. This means that the defender is reacting to Allen, and usually by the time he does, it is too late."

It's an excellent break down of the Celtics', and Ray Allen's, tireless work to get open looks at the basket -- visit SB Nation for a complete breakdown.