(Part Of) Kendrick Perkins Is Missing!

Share All sharing options for: (Part Of) Kendrick Perkins Is Missing!

Quick, gather up the search teams, because part of Kendrick Perkins has gone missing! Perkins, who helped lead the Boston Celtics to an NBA title in 2008 and played with the team for seven and a half seasons, got himself into fantastic shape and dropped 32 pounds during the lockout. Check out the photo (via Nike Blog) after the jump. 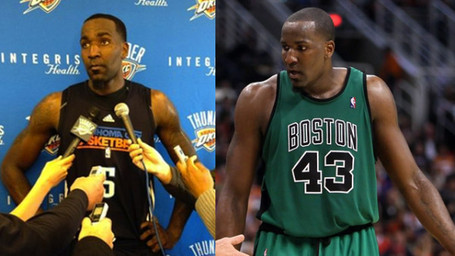 Someone on Twitter pointed out that he looks more like a shooting guard than a center now, and I have to agree with them. However, Perk will still be as mean as ever. Still, one has to wonder if his smaller self will be less effective in the low post without the 32 pounds. Sure, it will help him be more agile, but centers are supposed to be big guys.

Only time will tell. One thing is certain, though, Celtics fans still miss Perkins. A lot.