In a move that could be a precursor to a major league announcement, the National Basketball Association has officially canceled the entire slate of 2011-2012 preseason games for every team, per the league's Twitter account. 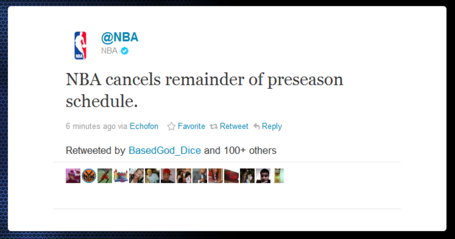 David Stern and the owners met with Billy Hunter and the players association on Tuesday, and while a little progress was made, not nearly enough was done to reach an immediate deal, according to reports.

"We engaged in more intense discussions today to see if we could close what remains to be a very large gap between the N.B.A. and the N.B.P.A.," Derek Fisher, the president of the players union said, "and today was not the day for us to get this done." (via The New York Times)

The NBA originally canceled 43 total preseason games and suspended the start of team training camps indefinitely, the first of which would have taken place this week with preseason games following next week.

While the cancellation of the preseason does not directly affect the state of the NBA's regular season, it does mean that the NBA is expected to lose at least two weeks of the regular season, even if a deal is reached soon.