Share All sharing options for: Rajon Rondo's Ankle Injury Will Sideline Him For A 'Couple Of Weeks'

eRajon Rondo will miss "a couple of weeks" with his sprained left ankle, this according to GM Danny Ainge on Thursday afternoon's Big Show on WEEI.

Rondo suffered the injury in the fourth quarter of Wednesday night's win over the New York Knicks when he severely rolled on his left foot while driving down the center of the lane. 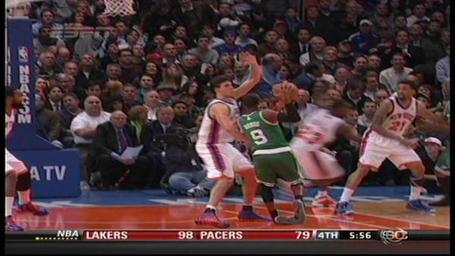 Rondo finished with 10 points and 14 assists in 34 minutes played, along with six turnovers. He reportedly left Madison Square Garden on crutches, according to CSNNE.com's Greg Dickerson.

The Celtics host the Atlanta Hawks Thursday night. If Rondo is indeed out the rest of the month, he'd miss seven games: Hawks, Pacers, Sixers, at Magic, at Pacers, at Pistons and Hornets.

Rajon Rondo Sprains Left Ankle In Win Over Knicks, Will Miss 'A Couple Of Weeks'