Share All sharing options for: Canada's Boston Pizza Changes Its Tune On The Boston Bruins (Again)

Canadian pizza chain Boston Pizza made its existence known to Bostonians in June after some locations changed their name to Vancouver Pizza to support the Vancouver Canucks in the Stanley Cup Finals against the Boston Bruins. It seems, however, that the flip-flopping pizza chain has changed their tune again - or at least one outlet in Ontario has. 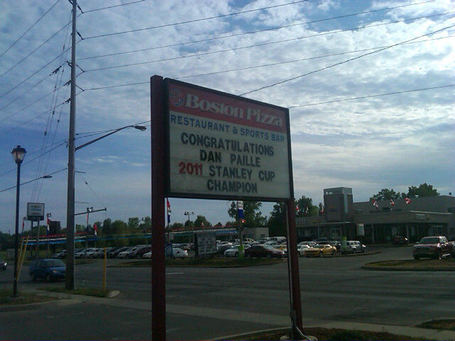 To their credit, Bruins communications guru John Bishop Tweeted that this location did not change its name during the finals, most likely in deference to their hometown Paille.