Let the celebration begin! The Boston Bruins' championship parade is set to take begin at 11 a.m. on Saturday morning outside of TD Garden and will proceed to Copley Square in downtown Boston.

The parade will be broadcast on several television networks, including but not limited to the NHL Network, WHDH, WBZ-TV, WCVB, FOX 25 and NESN.

Starting at the Garden, the parade turns left on Staniford Street, left on Cambridge Street, right on Tremont Street and right on Boylston Street. The Globe also provided information about parking in the area during the parade.

Here's a map of the parade route provided by The Boston Globe. 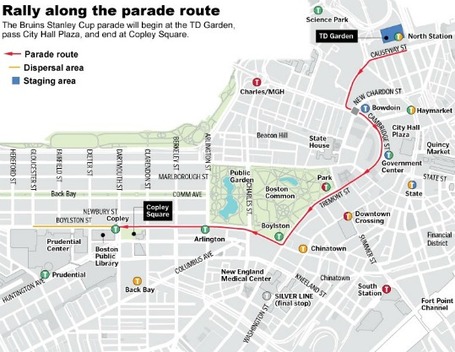 For more information on the Bruins' parade, including parking restrictions, visit the Globe's website.

For live updates, photos and video from the Boston Bruins' championship parade, follow SB Nation Boston's Gethin Coolbaugh on Twitter as he reports live from the parade on Saturday.