By the conclusion of Wednesday evening's Boston Bruins - Montreal Canadiens game at the TD Garden, the two teams had combined for 192 penalty minutes. The Bruins tallied 26 total penalties, and the Canadiens had 21.

The heated rivals exploded in the second period, with 15 penalties in the frame. You may have already seen the now famous Tim Thomas - Carey Price goalie fight that highlighted the period, but did you see 6 Bruins crowded into the penalty box like a clown car? Courtesy of ESPNBoston's Chris Forsberg: 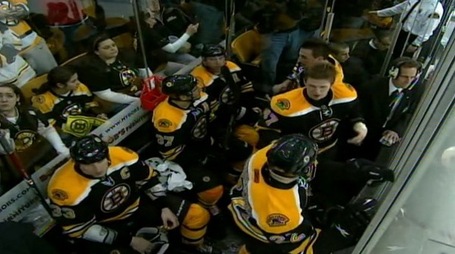 Despite the endless tussles, the Bruins came away with the 8-6 win against their archrivals.