Bruins Notebook: What Do Pink Bunnies, The Habs And 2011 Stanley Cup Garden Ice Have In Common?

Sounds like the Canadiens worst nightmare, but Chara will make a return to faceoff against the Habs in a Home-and-Home Series. But chances of him wearing the pink bunny suit are slim.

Share All sharing options for: Bruins Notebook: What Do Pink Bunnies, The Habs And 2011 Stanley Cup Garden Ice Have In Common?

You think a three day weekend is exciting? The Bruins are coming off a four day game-break before facing off against Montreal on Thursday. There are only two times this season where Boston will receive that kind of vacation--the other coming during Christmas, where they won't play a game during December 24-27. In the meantime, the Bruins have participated in charity events, had some time off and had a time to evaluate their play the last few weeks.

What Do Fred Flinstone, Pink Bunnies and Crayons Have in Common? 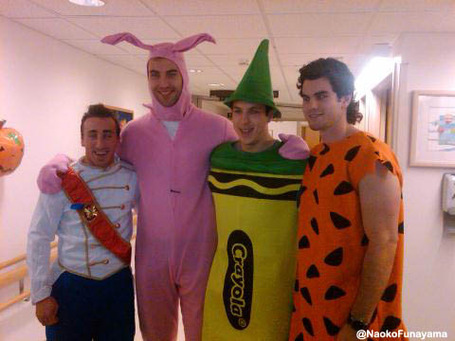 Speaking of charity events, this picture of four of the Bruins going to Boston Children's Hospital has hit the mainstream and has been the topic of conversation for the past 24 hours. While all the costumes seemed to make people and children smile, it was Zdeno Chara's pink bunny suit that really caught everyone's eye. Chara, Jordan Caron, Adam McQuaid and Brad Marchand all visited the hospital to bring treats and goodies to pediatric cancer patients.

Also this week, Nathan Horton started the "Home Ice Advantage" campaign, bringing some of the 2011 Stanley Cup Garden ice to local rinks throughout the New England area. He started with the Simoni Skating Rink in Cambridge and said the campaign is going to hit over 300 local rinks this year.

"Hopefully it brings all of New England good luck like it did us last year," Horton said in an interview with the media during his outing. "It's pretty special."

Home-And-Home Series
After the four day break, the Bruins will play a home-and-home series with the Montreal Canadiens, playing only two games in a seven day span. This is the first regular season meeting between the two teams, and the first time Benoit Pouliot will take ice against his former team. The Habs have struggled just as much as the Bruins coming out of the gate, and with the bad blood between these two teams mixed with the frustrations of poor starts, expect these next two games to be high energy, highly physical games.The Bruins are 3-5-0 while the Canadiens sit at a mere 1-7-0, winning only against the new Winnipeg Jets.

No News is Good News
The biggest build-up of this week was when the Bruins announced the team was going to take Tuesday off and GM Peter Chiarelli was going to have a press conference on Tuesday. Rumors included everything from big trades that would happen, to the announcement of Marc Savardretiring to perhaps Mark Recchi coming back. Nothing was off limits and Boston fans were drunk with anticipation.

But it was all for not. The conference call started, and much to the surprise of many, he had nothing to say. The questions started immediately, and Chiarelli answered them like any other press conference, but there was no indication that anything large or out of the ordinary was in the works.

So while it was fun for 24 hours trying to figure out what the GM had up his sleeve next, Boston fans can now settle back into reality sans worry, heading into Thursday's game.