New York and Boston are the fiercest of rivalry cities. From Bucky Dent to the Bloody Sock, each city has tasted its fair share share of victory and defeat. With three series this month, May has been, and continues to be, one of busiest chapters in the history of the rivalry. With the Knicks victory over the Celtics, New York has notched one on-the-court victory thus far. Regardless of what happens in the other two series, however, New York is virtually assured to win the off-the-court battle of the box office. In the month of May, New Yorkers are paying $365 to see their teams play while Boston fans are shelling out an average of $265. Below is a breakdown of each series. 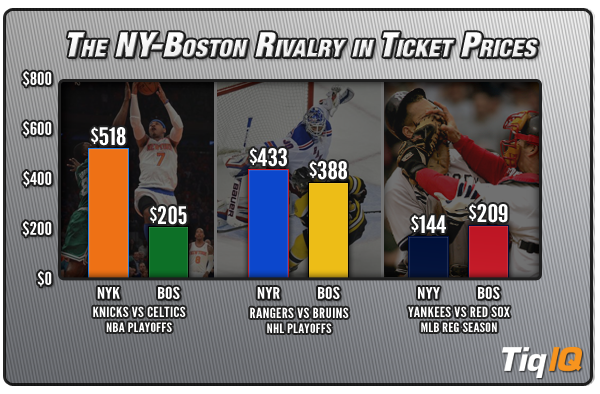 A generation of Knicks fans are still waiting for their first taste of championship glory, and as a result, demand was up for their recent-ended postseason. For the Eastern Conference NBA Quarterfinals, the average price for Knicks home games was $518, or 153 percent more than the Celtics home average of $205. Interestingly, Knicks fans only paid a 14 percent premium compared to regular season prices vs. Celtics fans 105 percent premium. This is due in large part to the fact that the Knicks had the highest regular season average ticket price in the NBA, while the Celtics had the eighth-most expensive season average.

For the first time in since the 1973, the Rangers and Bruins face off in playoff hockey. Both teams had dramatic seven-game series in the quarterfinals, and fans are excited about their teams prospects in a wide-open Eastern Conference. Despite their two losses in Boston, the average price for Game 3 at MSG has risen 20 percent since the series started to a current average of $480, and a get-in price of $219. The average price in Boston to see one of the games at TD Garden is $388. For the first two games, the average price was $289, and those that ponied up got their money's worth. With the possibility of a series clincher, the last two games have an average price of $514.

Bruins fans are paying a 49 percent premium to the regular season average price for the four games at TD Garden, while Rangers fans are paying a 74 percent premium for the three games at MSG. The current average price for a Game 7 in Boston, if necessary, is $593, and you'll pay $288 just to get into TD Garden. If it gets that far, though, the average price could easily break $650, as fans lose all sense of fiscal responsibility at the prospect of the next great New York-Boston moment.

Baseball is the one sport where fans in Beantown pay a premium over those in the Big Apple. With only 37,400 seats, Fenway Park has the smallest capacity of any baseball stadium, which is a big part of why Red Sox tickets are consistently more expensive than the Yankees tickets. The upcoming series at Yankee Stadium has an average price of $144 compared to an average price of $208 for the July leg of the rivalry in Boston. Despite all the press about the Red Sox sellout streak coming to end, the Red Sox are exceeding expectations and that has helped keep prices high.

According to Ace Tickets CEO Jim Holzman, the interest in Red Sox tickets is better than expected. "A strong start, a likable team and lower prices have all contributed to healthy demand early in the year," said Holzman. To be precise, ticket prices are up 19 percent this year compared to the same time last year, and if the Red Sox are still in the race come July, prices will likely continue to rise.

Not to be outdone, however, Yankee fans are paying 27 percent more than the 2012 average ticket price, as the ragtag team sits, somewhat unexpectedly, atop the AL East. For real drama, though, May baseball can't compete with September. Between September 6th and 15th, the Yankees and Red Sox play six times, and the average price for those games is 38 percent higher then the two series in May and July.