Two local Olympians were honored in Foxborough on Monday night before the Patriots preseason game against the Eagles. Both Aly Raisman and Kayla Harrison, two women responsible for adding to Team USA's leading gold medal count, walked out on the field to raucous applause in Patriots gear before kickoff.

Raisman is a Needham native who was an integral member of the "Fab Five" women's gymnastics team that captured the gold medal. Raisman, one of two American women to qualify for the all-around, also earned an individual gold on the floor exercise and a bronze medal on the balance beam. Things were a lot less tense on Monday night, as she was all decked out in her Pats gear: 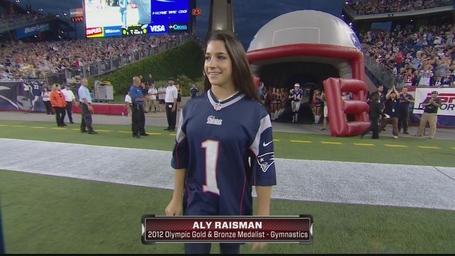 Harrison, the first American ever to win gold in judo, walked out prior to Raisman with her medal draped around her neck and over her Patriots jersey. Harrison resides in Wakefield.