Share All sharing options for: Red Sox Extras: No Case For Jon Lester

In Friday's 7-4 loss to the Tampa Bay Rays, Jon Lester was not at all happy with home plate umpire Mike Carlson.

As Carlson refused to expand the strike zone on a number of borderline pitches in the third inning, Lester began to stare in at him after every close call, growing visibly frustrated on the mound. Instead of adapting, however, Lester stubbornly continued to try to paint the corners, leaving him behind in counts and resulting in walks and, ultimately, forcing him to lob meatballs over the center of the plate.

After the game, Lester would say that he felt he had to throw the ball through "a keyhole", seemingly shifting blame onto Carlson for his bad outing. But does he have a point?

Brooks Baseball provides data from PITCHf/x, the system which tracks every major league pitch for speed, break, and eventual location amongst other things. Here is the strike zone information from last night's game: 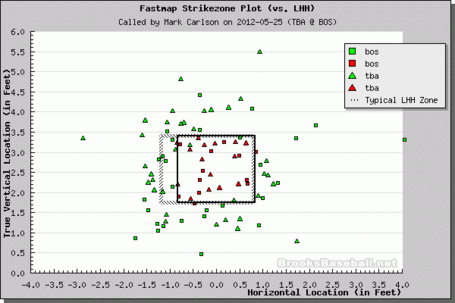 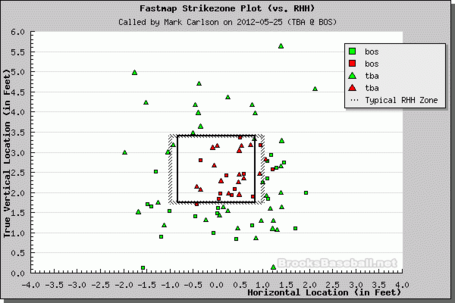 Long story short, yes, the zone was a bit small. In today's game, umpires who actually follow the zone as defined by PITCHf/x are few and far between, all ranking on the stingier side of things. But that's hardly a "keyhole".

What we also see is that both pitchers received the same zone. As an individual concerned about his numbers, Jon Lester has reason to be annoyed. The problem is that he didn't then take the zone into consideration and start throwing strikes early so that he wouldn't be forced to throw right down the middle late (and there are plenty of good called strikes there which are not home runs waiting to happen). Instead, Lester reacted selfishly and stupidly, insisting that the umpire change while ignoring the impact that would inevitably have on his team: a 7-1 deficit.

This is not ace behavior, and this is not even #3 performance. The Sox need more from their supposed top starter, both in terms of production and accountability.