Ticket prices in the East Region, where there are no real Cinderellas, are about half of what they are elsewhere, according to TiqIQ's data.

March Madness may usually come down to two powerhouse teams, but the thing that makes it one of the greatest sporting events in the world has always been the Cinderella stories. As Tebowmania and Linsanity reminded us, fans still love an underdog, and this year it's those stories that are having the biggest affect on ticket prices, according to TiqIQ's data.

Prices in these brackets have also seen a major jump in price since the third round wrapped up last weekend, particularly for the Sweet 16 round. In Atlanta, those tickets have gone up 98 percent this week, and in St. Louis prices have jumped even higher, rising 108%. To get in to either of these Sweet 16 sessions, it's going to cost fans a minimum of $90 in St. Louis and $175 in Atlanta (the highest for any regional round session).

In the East and West, no team is ranked lower than 7th and there are two No. 1 vs. No. 4 match-ups, yet Sweet 16 tickets in those venues are selling for about half as much as those in Atlanta and St. Louis. Along with the lower average prices, tickets in Boston are trending downward, dropping 53 percent this week, while tickets in Phoenix have gone up just 6 percent. While the average prices are much lower, the get-in price in Boston and Phoenix are similar to their higher priced counterparts, with both get-in prices just under $100.

It may still strike midnight on all these Cinderellas, their impacts on this tournament and its ticket prices are undeniable. If you'd like to see these underdogs, or any of the Sweet 16 and Elite 8 in person, TiqIQ has you covered. 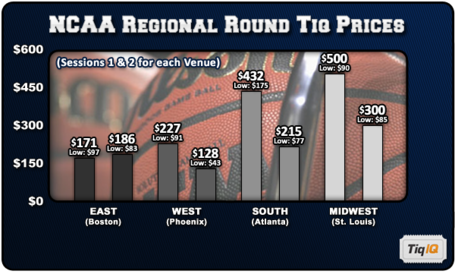