Share All sharing options for: Rob Gronkowski Takes Spiking To A New Level

New England Patriots tight end Rob Gronkowski had an amazing year. In fact, his 90 receptions for 1,327 yards was more than amazing but his 17 touchdowns led the team and set a new NFL record for tight ends. It's very obvious that without Gronkowski, the Patriots don't even sniff Super Bowl XLVI.

Gronkowski's touchdown dance consisted of an earth shattering spike that had to riddle the Patriots' end zones with dozens of football-sized divots that were probably a nightmare for the grounds-keeping crew. On Friday night, Gronkowski proved that his touchdown dance isn't limited to the end zone or even the game of football.

In what I'm assuming is the puck drop ceremony, Gronkowski placed the puck at center ice for a Worcester Sharks game in his own way -- by spiking it and probably creating a dangerous crack or hole in the ice. 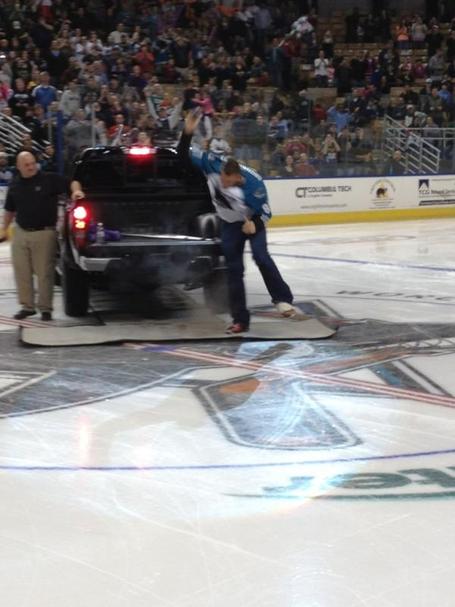 For more on the Patriots, head to Pats Pulpit.