After Sunday's NFC Championship Game between the Green Bay Packers and Chicago Bears (start time: 3 p.m. EST), the AFC Championship Game takes center stages. Kicking off at at 6:30 p.m. on CBS, the Pittsburgh Steelers, the AFC's No. 2 seed, hosts the Wild Card New York Jets. It will be the second meeting for these two teams in the past month -- the Jets knocked off the Steelers at Heinz Field in Week 15 in a must-win game for New York, 22-17.

On Sunday, the Steelers, are 4-point favorites, but that hasn't stopped Jets fans from looking ahead a bit. 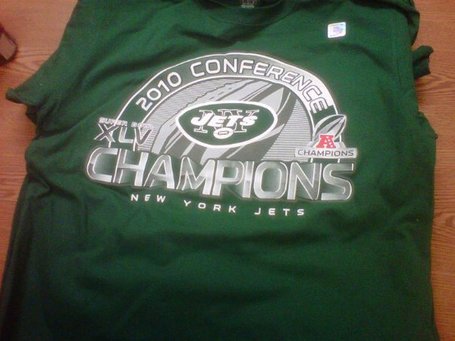 These championship shirts get out there prematurely every year, but it still could provide some motivation for the Steelers if they see these before Sunday's game. Though, they may not need much help: Pittsburgh is 16-4 all-time against the Jets, including their lone playoff meeting, a 20-17 Steelers' overtime win in the 2005 Divisional Round.