Mark Herzlich Leads Boston College Onto Field In His Return

Share All sharing options for: Mark Herzlich Leads Boston College Onto Field In His Return

For the first time since Dec. 31, 2008, Mark Herzlich took the field for Boston College, leading the Eagles out of the tunnel. 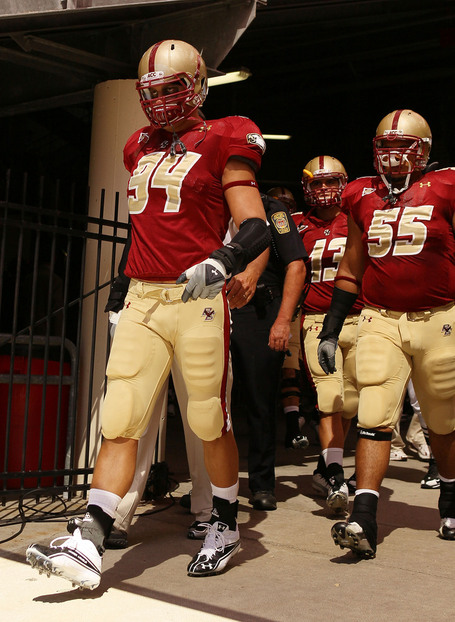 Herzlich ran out about 10 yards in front of the rest of the team, then paused, took off his helmet, looked up toward the student section, spread his arms wide and listened as the crowd roared.

He started at linebacker Saturday against Weber State, and while he playing time in the first half has been limited, his impact has been felt throughout the entire stadium. Because roughly 16 months ago, Herzlich announced he had been diagnosed with Ewing's sarcoma, a rare form of cancer.

It occurs in just one out of 600,000 people -- in which the cancer invades the bone, or soft tissue, typically in the pelvis or thigh. Indeed, it had made its home in Herzlich's left femur, where a tumor was found, and determined it was cancerous.

He sat out the 2009 season so he could fight disease, undergoing chemotherapy and radiation treatments, and having a 12-inch titanium rod inserted in his weakened left leg. But he won his battles, announcing last fall that he was cancer free.

His return, which was even further delayed this summer with a stress fracture in his right foot, came Saturday in Chestnut Hill, in front of a group of family and friends 75-people strong will be in the stands.

Before hand, his father predicted how he'd respond, saying, "I'll be a mess."