Friday's first round of the 2010 Deutsche Bank Championship at TPC Boston is underway, with play beginning at 7 a.m. EDT. American Ryan Moore is already at six-under through 12 holes.

The FedExCup points leader, Matt Kuchar, is two-back, sitting at four-under through nine, while noted golfing enthusiast Tiger Woods has yet to tee off. But off bigger concern to tournament officials is an uninvited guest who is set to play through -- Hurricane Earl.

Earl has made its way past the Outer Banks already -- fortunately, staying out at sea -- and is now setting its sights on New England. Cape Cod is currently under a high threat level, with the worst of Earl expected to reach the Boston area sometime late Friday night/early Saturday morning. The outer-most rain bands are already extending into the southern most part of New England (via Weather.com): 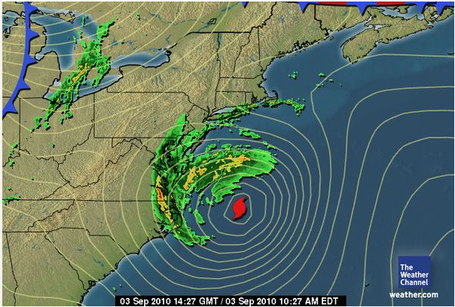 Officials at the Deutsche Bank Championship are expecting it to impact Friday's opening round -- they moved up the tee times by 40 minutes.

"We're going to come in (Friday) morning and start playing golf and we're going to play all we can," said Mark Russell, a vice president of rules and competition for the PGA TOUR. "Hopefully Earl will slow down and we'll get finished. If we can't, we've just got to play it by ear, get the players off ... get the spectactors to take shelter and see what happens. ...

DTN meteorologist Stewart Williams expects Earl to bring with it wind gusts of 50 mph by Friday night and 2-4 inches of rain.