VIDEO: Randy Moss Escapes From Revis Island, With One Hand

Share All sharing options for: VIDEO: Randy Moss Escapes From Revis Island, With One Hand

Back in January, Jets CB Darrelle Revis called Randy Moss a "slouch." Then late last week, Revis echoed that comment, saying, "I called him a slouch for a reason, because that game, he played like a slouch."

On Sunday, Moss did this: 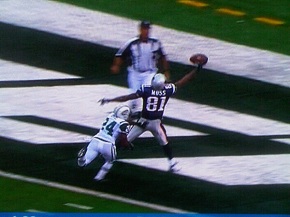 Hit the jump for video.

Revis clutched his hamstring on the play, left for locker room early before halftime and has been ruled out for the rest of the game.

And thanks to Jose, now in handy gif form!