Doc Rivers And The Presidential Snub

Share All sharing options for: Doc Rivers And The Presidential Snub

Usually, the President of the United States only meets with the winners. It's a good little PR stunt that doesn't take much time and now is expected of every winner of at least the most popular sports. We Bostonians should know, we've had our share of late... 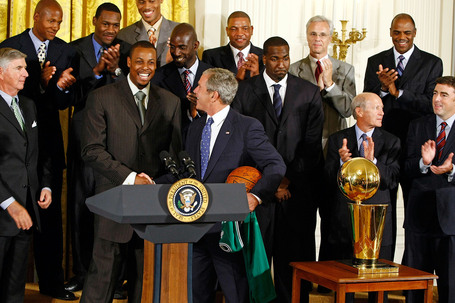 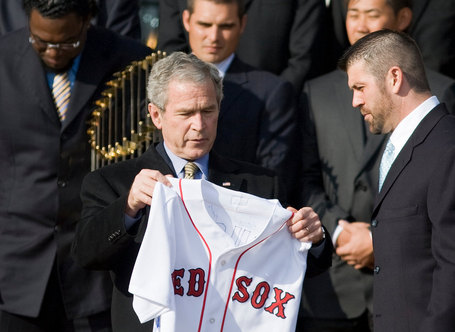 Unfortunately, it was not to be in 2010. Some other guys took Game 7 in the final minutes, sending the Celtics home disappointed, and with a visit to President Obama missing from the schedule. On his way home, Doc Rivers got a phone call.

His Boston Celtics had just lost Game 7 of the NBA Finals. It was the morning after, and the team was ready to board a private get to go back home. His cell phone kept buzzing. It was a 202 area code. Washington, D.C.

Doc assumed that it was Stan Kasten, an executive with the Atlanta Hawks during Doc’s playing days there. Kasten is now president of the Washington Nationals baseball team.

The phone buzzed again. Same number. Doc turned it off and settled in for the long ride.

We all know how it feels after losing a big game. However we deal with it--shouting, sulking, breaking things--the last thing we want to here is "Hey, man, good try. You guys were really close." We know. We don't need to be reminded. So it's no surprise that Doc ignored the call.

But then, the shocking twist!

Back in Boston, the phone buzzed again. It was a programmed number _ Kasten. May as well pick it up and hear the attaboy condolences from his friend.

Wait! If "_Kasten" is programmed in, then who was that before?

"Doc, hold on, I have a friend who wants to say hello." He gave the phone to the guy next to him.

"Doc this is President Obama. I guess I can’t get you to pick up the phone," he said.

Doc lost the championship. Nothing is going to make up for that. But at least he came away from it with a story about the time he ignored the President like so many a junk caller.