Share All sharing options for: Shaq Agrees To One-Year Deal With Celtics

According to multiple reports, Shaquille O'Neal has decided to sign with the Boston Celtics, agreeing to a one-year deal for the veteran's minimum. The addition of Shaq will give Boston one of the most star-studded rosters in recent memory.

Shaq is the size and big man Boston needed, as they'll be without the services of Kendrick Perkins while he recovers from knee surgery, possibly until February.

O'Neal was not a serious consideration for most of the summer primarily because his asking price was significantly more than the Celtics (and most teams, for that matter) were willing to pay.

But as the summer wore on, the Big Diesel was not in Big demand as team after team began to fill their roster while in the process, pass on adding the future Hall of Famer and three-time NBA Finals MVP.

If you're having trouble picturing Shaq in Celtics' green, don't worry, the Twitter account NBA_Photos has you covered: 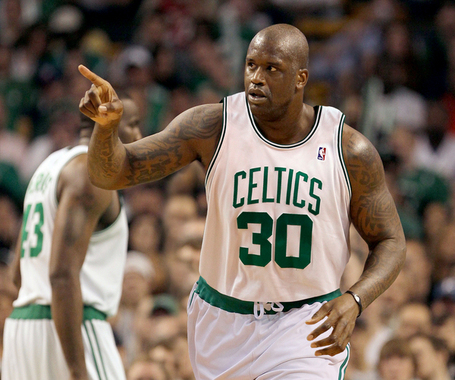