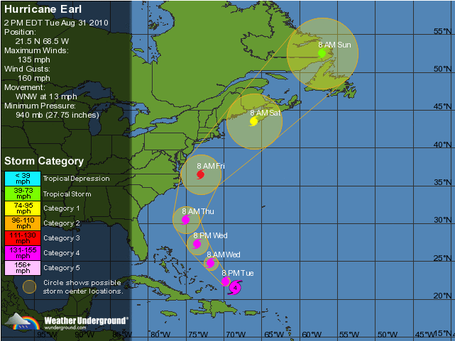 Weather Underground's five-day tracking map of Earl has it hitting the Boston area sometime late on Friday, but its effect could still be felt Saturday afternoon.

It looks as if Hurricane Earl will no more than sideswipe New England, and on Friday instead of Saturday. Yet the storm remains "somewhat" a factor in Boston College’s plan for the opener against Weber State, Eagles SID Chris Cameron said Monday. The Wildcats already had planned to fly the 2,300 miles to Boston on Thursday.

If Weber State is unable to make the trip from Utah, rescheduling the game would be difficult, points out BC Interruption: "During BC's only bye week in week 3, Weber State plays a Big Sky Conference game at Sacramento State."