In The Hockey News' most recent issue, a familiar face for Bruins fans takes center stage. Patrice Bergeron, the stud 25-year old centerman, leads off what promises to be a month full of hockey predictions. 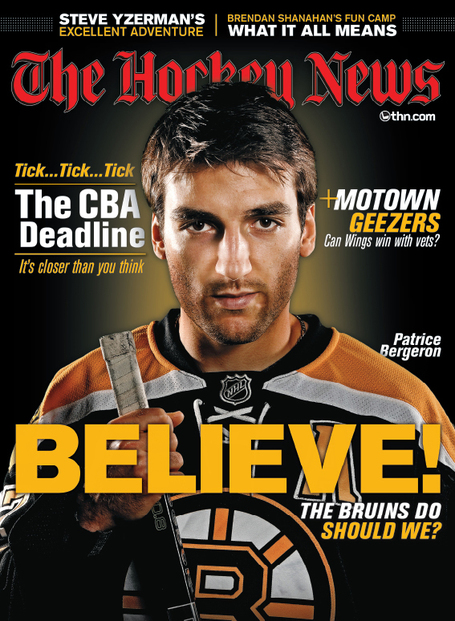 More noteworthy, however, is that the Bruins themselves are taking center stage.

After one of the best offseasons in recent memory brought sharpshooter Nathan Horton to the Bruins in exchange for perceived goat Dennis Wideman, and a draft that saw the Bruins add speed, size and even NHL-ready skill in Tyler Seguin, Jordan Caron and Jarred Knight, a new-look Bruins squad is ready to hit the ice in 2010 with their eyes once again on Lord Stanley's Cup.

The team had high hopes last year, too, before being derailed by a series of injuries to key offensive cogs Marc Savard and Milan Lucic, among others. Playoff injuries to Marco Sturm and David Krejci led to an early exit by the Bruins, even after they'd gone up three-games-to-none on the Philadelphia Flyers.

With a healthy front line, a quickly-improving blue-line and a goalie tandem that reasons to be the apple of 29 other NHL team's eyes, the Bruins have every reason to believe that this is the year.